Department of History, Faculty of Social Sciences and Humanities, University of Macau
November 2010

Figures, Tables and Maps. I

2.1 Amount of Foreign Opium through Foreign Customs into Guangdong. 23

2.2 Taxation and Lijin on Foreign Opium at Foreign Customs. 33

3 Conflicts of Interest between Native Customs and Foreign Customs. 38

3.1 Overview of the History of Customs in China. 38

3.2 Conflicts of Interest over Opium Taxation and Lijin. 41

4.1 Customs Taxation in the Qing Dynasty. 51

4.2 Conflicts of Interest over Opium Taxes between the Central and Guangdong Governments  55

5 Cultivation, Importation and Consumption of Native Opium in Guangdong. 61

5.3 Consumption and Re-export of Native Opium into Guangdong. 67

6.3 An Estimate of the Amount of Foreign Opium Smuggled into Guangdong. 84

Figure 2: The rate of foreign opium imports into Guangdong and Shanghai to those into China  27

Figure 5: The rate of opium income to the customs’ revenue in Guangdong. 35

Figure 8: The estimated amount of native opium coming into Guangdong. 68

Figure 10: Opium through the Lappa Customs, and from H.K. to Guangzhouwan. 81

Figure 11: Amount of foreign opium through the Canton Foreign Customs. 88

Table 1: Budget deficit of provinces in the Late Qing Dynasty. 53

Table 2: The price of native opium in Guangdong. 69

Table 4: The estimated amount of foreign opium smuggled into Guangdong. 85

Map 1: Map of the two native customs stations around Macau. 44

I would like to thank many people for helping me to get this thesis finished.

First and foremost, I owe my deepest gratitude to my supervisor, Prof. Robert James Antony, a respectable and responsible scholar. Without his enlightening instruction, impressive kindness and patience, I could not have completed my thesis. His keen and vigorous academic observation enlightens me not only in this thesis but also in my future study.

Next, I shall extend my thanks to several professors: Tang Kaijian, Paul Van Dyke, George Wei, Vincent Ho, and Hao Yufan at the University of Macau, Takeshi Hamashita at Sun Yat-sen University, Lin Faqin at Macau Polytechnic Institute, and Wang Shoukuan and Feng Peihong at Lanzhou University, for all their kindness and help. I am indebted to my many friends, especially Chen Zichang, Wang Qichen, Zhao Xinliang and Zhang Zhongpeng, for their encouragement and support.

What’s more, I am very grateful to the Department of History of the University of Macau, Macau Documentation and Information Society and Macau Oral History Association, for their generous support in funding my research.

Finally, special thanks go to my family, especially my parents, who have supported me throughout so many years of education, both morally and financially. 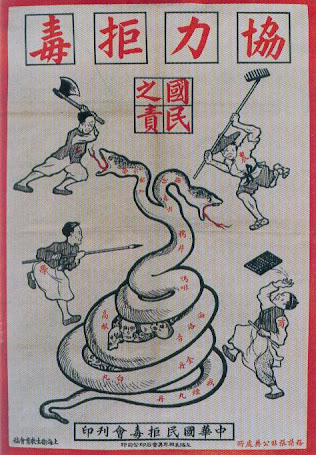 The aim of this thesis is to study the opium problem in Guangdong Province between 1858 and 1917. The period of 1858-1917 is a very special stage of opium trade in China, because from 1858 the opium trade became legal in China, and after 1917 all the records of opium import disappeared in the reports of the Chinese maritime customs. During this special period there were large amounts of foreign and Chinese native opium legally or illegally coming into Guangdong, which had a profound influence on the society in Guangdong at the time. This thesis will focus on the opium problem in Guangdong during this special period, including the opium import and significance of opium taxation to maritime customs, and several conflicts relating to the opium problem between different interest groups: foreign customs and native customs, the Chinese central government and local government, Chinese opium and foreign opium, and opium smugglers and preventive officers.

It is my contention that the study of these conflicts of interest over opium is a key to understanding the social, economic, and political history of modern China.